Unlike some fighters, Ben Nguyen does care about card placement. The No. 8-ranked flyweight explained that he “was really disappointed” when he saw his bout was scheduled as the fourth fight in Perth, Australia.

To see people not ranked above me that only had like maybe one or two fights in the UFC on the main card, it’s just kind of like, ‘Why is that guy up there? Why am I down here?’” Nguyen told BloodyElbow.com. “I’m fighting a ranked guy; we’re both ranked. This could be a title contendership fight.

Nguyen, who most recently upset Tim Elliott via submission last June, isn’t exactly sure what went into the UFC’s decision to put the Formiga fight so low on the card. But, it did cause a few different ideas to go through his head.

For one, he feels that this shows that the UFC disrespects the entire 125-pound division — not just him and Formiga.

It kind of set a precedent for me, saying that the UFC doesn’t like the flyweights, or they’re trying to kill a division,” Nguyen said. “That’s been floating around in my head. I don’t know what they’re trying to do.

I feel like they bury us on the prelim cards all the time. It’s kind of a slap in the face for me, especially to put two ranked guys on the prelim card. I just don’t understand it. I don’t know. Maybe they’re trying to kill a division. Who knows?

Historically, the flyweight division hasn’t received the same amount of attention from fans as other weight classes. Johnson, the only titleholder the division has seen in the UFC, is not considered a major draw on pay-per-view; he has struggled to connect with a wider audience, but perhaps more importantly, the promotion has failed to promote him properly. 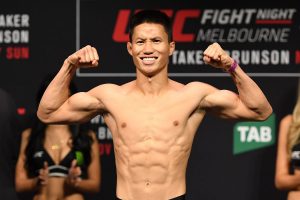 Nguyen cites “casual fans” making up a large portion of the MMA fanbase as the reason why the flyweight division isn’t generally successful when it comes to television and pay-per-view numbers.

There are casual fans that want to see the violence, the drama. And there’s people like us – we like to see the technical side of fighting,” he said. “But we’re just a smaller number than the general public, unfortunately. Not everyone can differentiate an armbar and kimura. But that’s just the way the cookie crumbles.

Nguyen’s leverage would certainly go up with a win over Formiga at UFC 221, but he doesn’t think there is much he can do to challenge the UFC’s main-card snub. For now, he plans to simply keep on winning – and that continues Saturday.

I’m just gonna keep winning fights and do what I do, punch people in the face,” Nguyen said. “There’s not much I can do. I feel like if I did speak, there wouldn’t be much behind it. It’d be nice to pick their brains and see what’s going on, but I don’t think I’d go as far as like flying to (Las) Vegas and questioning the UFC.